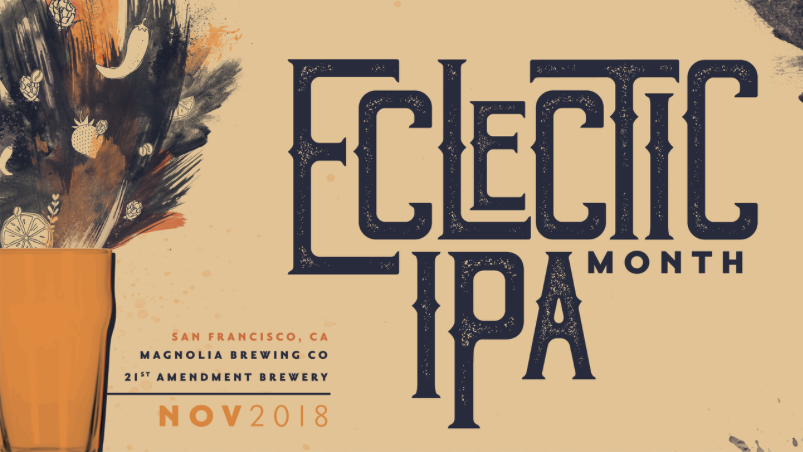 IPAs for Everyone! Eclectic IPA Month Debuts This November

As tradition would have it, every November we have teamed up with our local friends at Magnolia Brewing for a month-long celebration of artisanal beers. In past years, the focus was on Belgian Beers as part of BRU/SFO festivities, but for 2018 we have decided to change direction and do things a little different with the debut of the first annual, Eclectic IPA Month!

Thanks to Dick Cantwell from Magnolia, Shaun O’Sullivan from 21st Amendment and the brewers from each respective brewery, craft beer drinkers can enjoy 12 new IPAs, six from each location, throughout the month:

These delicious creations will be available throughout November, with scheduled releases each week, starting with three beers from each brewery on Nov. 1, and then one beer from each brewery the following weeks until all 12 beers have made their way on-tap.

IPA enthusiasts who try all 12 beers and get their Pint Pass stamped for each will receive a commemorative Eclectic IPA Month glass (while supplies last). Pint Passes will be obtainable at both brewery locations.

Furthermore, for those who want to dive deeper into the magic behind Eclectic IPA Month, they can take part in one or both Beer Schools* hosted by Dick Cantwell and Shaun O’Sullivan:

*details about each event forthcoming

We hope to see you this November!